Demonaz talks about the birth and inspiration for Immortal

On July 6th, 2018, IMMORTAL will release their highly anticipated new album »Northern Chaos Gods«. Norwegian black metal legend, singer and guitarist Demonaz tells us about the band’s beginnings and what inspired him to start a band in the underground metal scene of the early 90s. 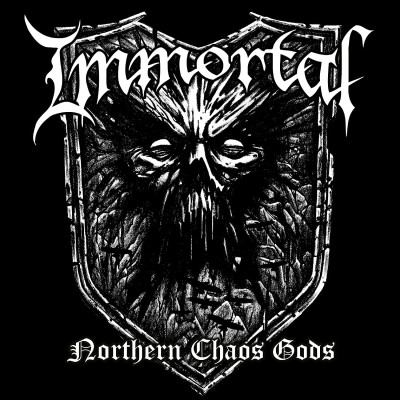 “I have always been into the dark side of music. Heavy metal, thrash metal, then underground black and death metal bands emerged. I wanted to start the ultimate band in 1990. I had the name IMMORTAL and a vision. I never felt we were a part of any scene. I worshipped the first albums from CELTIC FROST, VENOM and BATHORY. They were the ones that inspired me to make dark and cold music. Our first vinyl release was a 7″ inch in 1991, and then our first IMMORTAL album »Diabolical Fullmoon Mysticism« followed in 1992.

My inspiration to start IMMORTAL came from the environment that I grew up in. The cold winter, the dark woods, the mighty mountains and glaciers. I wanted something unique to bind the lyrics and music together. I created Blashyrkh, meaning ‘The realm of all darkness and cold‘.

The harsh, cold and dark side of nature is a never ending inspiration. A part of the mysterious force that surrounds us and slowly erases everything. It is timeless, without rules and wins in the end. It’s a deep fascination and respect for nature built on instinct. I see pride, power and greatness from a dark perspective.

I am devoted to the early days of black metal. Late nights in the woods, embracing darkness, breathing fire, obsessed by the winter moon. It is what keeps my spirit alive. This has inspired me to write riffs, lyrics and music and made the foundation to all our music. The songs on our new album is no exception. Every riff, line, word and song of IMMORTAL through all the years has been on my ears, and in my head from the deep forests and all the way to the frozen mountaintops.

The very first inevitable BATHORY albums along with »Under The Sign Of The Black Mark« and »Blood Fire Death« has also been a huge inspiration. Quorthon still remains the one riff master for me. He also inspired me lyrically to a point. In 1997, I got diagnosed with tendinitis in my left arm. I was unable to perform live, but I never stopped playing or composing. Even so we continued to work with the music as before. I recovered from an arm operation around 2014 and started to make the first guitar riffs for our new album “Northern Chaos Gods” in 2015. It was a relief to focus on music again and enter the studio to record guitars for the new album, as well as singing my own lyrics.

I would never compromise on my original vision of bringing fans through the frozen kingdom of Blashyrkh along with the most ultimate grim, cold, dark and timeless music – no matter the reason.”

Stream the new track on Spotify, Deezer or Apple Music: http://nblast.de/ImmortalNCG
A lyric video of the first single can also be seen here: https://youtu.be/c5uP9PlEDro